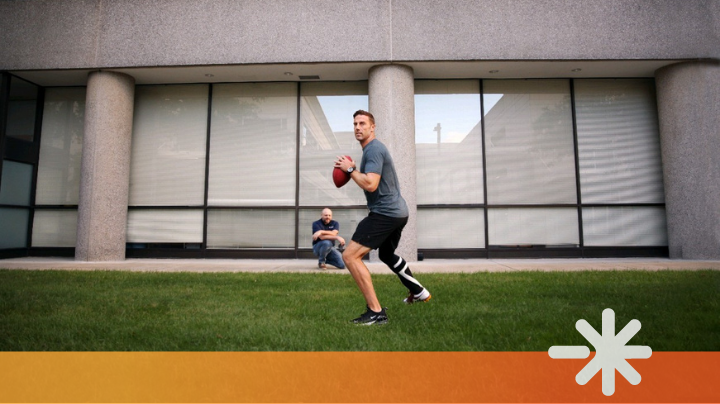 Following Alex Smith’s debilitating leg injury in 2018, nobody expected him to return to the game. In fact, the only goal at that time was to save his leg from amputation and hope that he’d eventually be able to walk again. Two years, hundreds of hours of rehab, and several custom ankle foot orthoses (AFOs) later, Alex officially made his comeback on October 11 during the Washington Football Team’s game against the Los Angeles Rams. The Washington Post reporter Nicki Jhabvala details his journey back to the field in her October 15 article, “The leg brace that allows Alex Smith to play football.”

Thanks to Alex and a few others before him, an injury that was previously billed as a “death sentence” for athletes’ careers is now manageable thanks to custom leg bracing. Giving Up Wasn’t an Option

It is no doubt that Alex’s grit, determination, love of the game, and most of all, the unwavering support and collaboration of his family, friends, and healthcare team are what got him to where he is today.

In the article, Alex’s Hanger Clinic orthotist Mike Muratore said, “From the day I met Alex until now, he’s needed less and less support because he’s just so strong…He’s doing more than he probably should be able to.”

Just because Alex is strong doesn’t mean his road to recovery has been easy – it’s been a lot of trial and error. Because his peroneal nerve was removed during one of his 17 surgeries to repair his leg, he lost his ability to lift up his foot. More commonly known as foot drop, this condition made it difficult for him to gain enough clearance when he ran.

After trying several different bracing options over the course of a year, Muratore knew Alex needed something dynamic and lightweight, with the right mixture of flexibility and rigidity, so he could move the way he needed to out on the field.

Muratore continued in the article, “It’s similar to what we would do for anyone else that had custom bracing. It’s just for Alex…his activity goals are pretty unique and require a pretty unique solution.”

That unique solution ended up being the SpryStep Flex by Thuasne USA. Muratore worked closely with Thuasne to create the current version of Alex’s SpryStep. Just because he found a version that works, doesn’t mean the journey is over. Muratore continues to work with Thuasne to refine their designs, creating several different versions with varying thicknesses.

Even though the Washington Football Team lost their October 11 game against the Rams doesn’t mean Alex’s outing wasn’t successful. Thanks to his brace, he (and his leg) stood up to several tackles in a hard-fought game and proved to the world that nothing is impossible.

The photos included in this article were provided by Heidi Muratore.

If you or someone you love is experiencing the effects of foot drop, get in touch with a board-certified orthotist at a Hanger Clinic near you.