The inward twisting of the thigh bone, also known as the femur.

Femoral anteversion is an inward twisting of the thigh bone, also known as the femur (the bone that is located between the hip and the knee). It causes your child’s knees and feet to turn inward, or have what is also known as a “pigeon-toed” appearance.

Femoral anteversion (also known as intoeing) is often noticed by parents when their child begins to walk, but it may be present across various ages for a variety of reasons.1 Intoeing is commonly seen in children with cerebral palsy and other neuromuscular pathologies and is typically diagnosed in children ages 4 to 6 years old through a physical examination and a review of their medical history. During the examination, the doctor obtains a complete prenatal and birth history of your child and asks if other family members are known to have femoral anteversion. Generally, no X-rays are necessary.

In the typically developing child, femoral anteversion will generally resolve itself over time.  It is part of the normal growth and development process that takes place between birth and age 8.

In children with neuromuscular disorders, such as cerebral palsy or spina bifida, femoral anteversion often does not resolve itself, because these children may not walk very much or at all. Although specialized shoes and orthoses (braces) are often prescribed by the child’s doctor to address femoral anteversion, most studies have found these interventions to be of little benefit.

A lower limb brace may be used to enhance mobility, improve alignment, correct abnormal walking patterns, protect and support your child’s bones and muscles, and help achieve their goals. 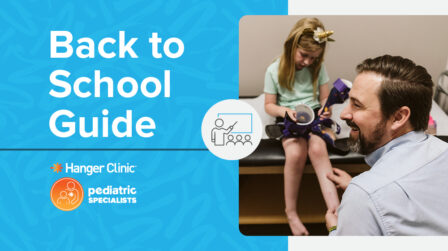 Back to School Guide: Orthotic and Prosthetic Tips Tips for Traveling with Limb Loss or Limb Difference A Professional Overview: Identification and Treatment of Toe Walking
View All