In January 2019, Jackie and Kory Rankin welcomed a new baby girl, Quinn, with great joy and anticipation. Like many babies, Quinn’s head was misshapen at birth but when it didn’t resolve on its own as expected, Jackie and Kory suspected something was wrong. A couple of weeks later, baby Quinn was diagnosed with metopic craniosynostosis, a premature fusion of the bones in her head. Quinn underwent surgery to have the fused piece of bone removed and then received her custom cranial helmet to begin the reshaping process. Eleven months later, baby Quinn celebrated her cranial helmet graduation, just a couple weeks shy of her first birthday.

When Quinn’s head shape was not returning to normal a couple of weeks after she was born, her parents knew in their gut that something was wrong.

“I pushed for answers at Quinn’s one-month appointment, which led to X-rays and then a CT scan,” says Jackie. “We got the official diagnosis of metopic craniosynostosis when Quinn was six weeks old.”

In simple terms, craniosynostosis is when the bones that make up a baby’s skull prematurely fuse together. This condition can result in skull and facial deformities if it is not addressed quickly.

Jackie was devastated at the news. “I couldn’t even eat,” she says. “I was so upset and scared.”

Jackie and Kory learned that Quinn would need endoscopic craniectomy surgery to correct her craniosynostosis.

At just 9.5 pounds and in the sixth percentile in weight at two months old, Quinn was too small for the operation. She also had food allergies and reflux issues that made it difficult for her to keep food down and gain weight.

Jackie knew the importance of early intervention, so in March 2020, the Rankin family drove from Kansas City to El Paso, so baby Quinn could have the surgery, which was a success.

The Next Step: Helmet Therapy

As part of Quinn’s treatment, she was referred to Hanger Clinic for assistance with an orthotic helmet to help her head heal properly.

Thankfully, Quinn had access to Hanger Clinic experts at locations in both El Paso and Kansas City who were able to coordinate Quinn’s care seamlessly between the two cities.

Prior to the surgery, Jackie connected with Hanger Clinic’s Shannon O’Shea, CPO, in Kansas City, who is one of the nation’s leading cranial remolding specialists. Shannon worked closely with Hanger Clinic clinician Paul Lanciault, CPO, in El Paso to get Quinn’s scans and measurements, so she could ensure the helmet would fit Quinn properly. Both Shannon and Paul were there every step of the way to support Quinn and her family.

“Shannon was amazing,” Jackie says. “We knew she was only a text away—she even texted us the day of Quinn’s surgery.”

On April 1, Quinn received her first helmet in El Paso before heading home. After that, Quinn had a follow-up appointment with Shannon every week for several months to make sure her progress was on track.

The Road to Recovery

Over the course of the year, Quinn went through three helmets, relying on Shannon’s expertise to ensure a proper fit so Quinn would heal properly while being as comfortable as possible.

“Quinn wore her helmet for 23 hours a day every day,” Jackie notes.

During the day, she would get one or two breaks where Jackie would clean and sanitize the helmet. Starting in September, Quinn only needed to wear the helmet overnight. Despite the rigorous schedule, Quinn did a great job.

“We had zero issues with her adjusting,” confirms Jackie.

At the end of the year, the Rankin family’s diligence paid off. On December 19, Quinn completed her treatment and was able to remove her helmet for good. Her family celebrated this milestone with a graduation party, complete with a helmet-shaped cake.

Although Jackie initially struggled with Quinn’s diagnosis, she wants other parents to know everything will work out in the long run if they have the right care in place. After nearly a year of surgery, helmet use, physical therapy, appointments, and sleepless nights, Jackie sees nothing but hope ahead.

“I wish I would have trusted the doctors who told us that, after this first year, she would be a happy, healthy, normal, little girl,” insists Jackie.

She’s grateful to Shannon and Paul for helping her family through this difficult period, too.

“We would absolutely recommend Hanger Clinic,” she says. “Our care team was absolutely amazing, working with us every step of the way to get Quinn the best care—even after hours and on weekends. It felt like Hanger was family.”

Want an expert opinion as to whether your child will benefit from a cranial helmet? Schedule a free evaluation with a Hanger Clinic cranial remolding specialist. 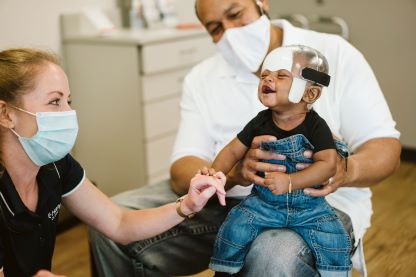