Alayna DeLeon, an ER nurse and below-knee amputee, went from struggling with overwhelming grief to answering the ultimate calling: to help others. A decision that would not only change her life but the lives of hundreds along the way, she credits her strength to her family, friends, and Hanger Clinic team in Bullhead City, AZ who stood by her through it all.

In 2006, 19-year-old Alayna DeLeon had her whole life ahead of her. She had big dreams for herself and was ready to take on the world. That is until one fateful day when she suffered a traumatic injury to her left knee, compromising the blood flow to her foot. After spending 40 days in Trauma ICU, ICU, and surgical units, she and her doctors ultimately made the decision to amputate her left leg below the knee.

Almost immediately following her amputation, Alayna fell into a deep depression. She sat in a dark room, denied visitors, and spoke to only the few people who came to help take care of her. The physical, mental, emotional, and even financial impact of the amputation not only took a toll on her but on her family as well.

Things for Alayna eventually got so bad that she started to refuse physical therapy, visitors, and phone calls altogether. This is when the nurse who had been taking care of her sprung into action. She came into her house, opened the curtains, turned on the lights, and told her that if she was unhappy, it was up to her, and her alone, to make a change.

“It was the kick in the head I needed to realize that if I wanted things to be better, I am the one that had to make them better,” said Alayna.

Alayna’s grieving period lasted for two years. During that time, she credits mentorship from others who had been through similar challenges as being her greatest resource. “When I was in rehab, I had no idea what I was doing or what steps were to be taken next. The other amputees took me under their wing and pointed me to Hanger Clinic, because that’s where they felt I would receive the best care.”

Her prosthetist Jason Leal, CPO, and the entire team at the Hanger Clinic in Bullhead City, AZ did everything they possibly could to ensure Alayna had the best prosthesis to accomplish her goals, which were now becoming very clear: she wanted to become a nurse. Inspired by the nurse who took care of her at her lowest of lows, she knew she wanted to do the same for others. And, at age 26, she enrolled in nursing school.

Nursing school wouldn’t happen without its fair share of setbacks for Alayna, including a revision surgery and a serious bone infection. But, she persevered through it all, graduating without ever missing a class.

Now in her early 30s, Alayna has been a registered nurse for almost seven years. Throughout her time in the emergency room, she has been blessed to come into contact with other amputees, some experienced and some new to it all. She enjoys sharing her own experiences and providing them with the education they need to heal and recover.

Though she had already done so much for the amputee community, she longed for more. Deep within her, she has always felt a calling to serve her country. In fact, one of her goals is to work at Walter Reed to help our servicemen and women who are now amputees with rehabilitation and education.

In the blink of an eye, her sights would shift from Washington, DC to New York City when something unimaginable took hold in our country–the COVID-19 pandemic.

Keeping You Safe at Hanger Clinic

Stay up-to-date on the precautions we are taking to provide orthotic and prosthetic care in a safe environment.

When the opportunity arose to help relieve nurses battling the coronavirus in one of the nation’s hardest-hit areas, Alayna didn’t hesitate: “I knew it was what I was supposed to do.” She boarded a flight in early April and served for over two months at Lincoln Medical Center in the Bronx—the third busiest ER in the country.

The work—daily shifts without days off for 21 days at a time—was extremely demanding, but Alayna says, “I was greeted with open arms, and it’s really recharged my soul. Yes there was a lot of pain, but I came home everyday knowing I gave them the best possible chance for recovery and sometimes even life.”

Back in her native Fort Mohave, Alayna’s fiancé, Jamie (they plan to marry in November), waited for her. Jamie is a flight nurse who was understandably worried for Alayna, but ultimately encouraged her to follow the call to New York City.

Alayna is also a mom to four kids (20, 19, 17, and 15), and credits her ability to stay mobile enough to work and take care of her family to prosthetic care at Hanger Clinic: “I couldn’t be more thankful for how [Hanger Clinic has] continuously evolved my treatment for what I needed–it’s a never-ending process. And, I am so thankful that they have grown with me.”

The support she’s received from her family and friends throughout her life, and especially through this experience, has been an unending source of strength and inspiration: “I am thankful that I am strong enough mentally, emotionally, and spiritually to be able to handle a tough job such as this.” 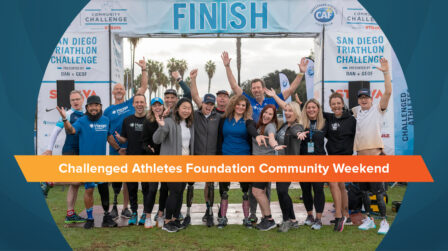